Welcome to September's Blog with Friends Round-up. Each month, participating bloggers choose a theme, and create a unique post based on that theme. Each post will be different and connected to the theme in whichever way the blogger chooses. This month's theme is 'Wishful Thinking'. When I heard the theme, I knew I had to participate. I have been scribbling down thoughts about a post for weeks, and though I know it won't add much to the round-up, I had more than once told myself it was wishful thinking on my part. So, here I am, giving my addition to the round-up. Blog with Friends posts can include any number of things, from poetry to short stories, to recipes and crafts, to DIY instructions and long winded rants, and anything in between. Once you've read mine, I do hope you go check out the wonderful offerings, from the other talented participants. A short time ago, I went to the movies, and watched the extended release of "A Star is Born". I honestly had no idea what the movie was about, and had not gone to see the original release, but decided to see it, after seeing Gaga and Bradley perform together. I was amazed the he could sing so well, and she had me hooked. I had to see her act and hear him sing. I was warned a tiny bit, that it was emotional, but I genuinely found myself unprepared in the end.

It really gripped me for a while. I wasn't entirely sure why. I am so not Gaga or Ally. I cannot sing or dance. I am so not a star. I can honestly say, I am grateful, I have never had a Bradley/Jackson in my life. I would not have minded, just would have hoped for a different outcome. (On a totally unrelated side note, I have prayed for a Sam Elliot, or just HIM in my life since I was young, and sad to say, it never happened, but I loved seeing him in the movie!) So, I was not sure why I was so taken by the movie, but it truly touched me. I have listened to the soundtrack often and thoroughly. I really enjoyed it all, as a package, and have planned to watch other versions in the future.

A few weeks ago, I had an epiphany of sorts. It happened as we were cleaning house on a Saturday. I knew since the first time I heard it, that "Remember Us This Way" was my song for Chad. Down to the fact he was born in Arizona, and we reside in California, and if you have heard it, you understand that. I had put on the soundtrack, and was cleaning our bedroom, and reliving the movie, while letting the songs washed over me.

Suddenly I understood. I finally understood, what my subconscious had obviously known, that I had not figured out yet. I suddenly understood exactly why the movie hit me so hard, down to my soul. I just had to throw out the norms and really get to the heart of the matter. I am no Gaga. Chad is no Bradley. However, I am a Jackson and Chad is an Ally. Once I stopped trying to relate to gender, and thought about relating to the characters, it all made sense.

I told Chad what I realized. It would have been easier, if he had seen the movie, but I explained it as best as I could, and in terms of he and I, so that he would understand. I unloaded baggage I have been holding in for years. I also made him listen to "Remember Us This Way". REALLY listen to it. I cried so many tears.

If you haven't watched the movie, you may want to skip this next bit. If you have watched the movie, you know that Jackson has a chronic ailment, and he tries to overcome the impact it has on him, and the struggles of treating it cost (not talking money) him so very much, including his life. He loves Ally, but he feels like nothing but a burden. He medicates to function, and over-medicates to handle the weight of it all. He holds it all in. He doesn't reveal his soul to Ally, most probably because he does not want to be more of a burden, than he already is.

Ally loves him. She loves him despite it all, and she'd do anything for him, though she never truly understands him and his innermost battles and struggles.

Ultimately, he felt like he was dead-weight, weighing her down, and he ends his own life.

So, explaining how I feel to Chad, was difficult and freeing.

However, it is hard to explain something to someone, who has never experienced it. So, I relied on the spoon theory. If you have anyone in your life, who is chronically ill, I recommend looking into the spoon theory, and trying to get some understanding.

Basically, what it is saying, is that everyone has a supply of spoons, to accomplish the necessary and desired tasks, of that day. Everything the person does, uses up their spoons, and different activities require varied numbers of spoons. The amount of spoons a person has, and how many spoons tasks takes, varies from person to person. Healthier people tend to have more spoons and require fewer spoons per task.
Chronically ill and temporarily ill people, tend to have a limited spoon supply, and tasks take more spoons to complete.

For example, maybe taking a shower for myself, required three spoons, and for Chad, it only requires half of a spoon. Tasks taking more spoons for some people, possibly would not be quite so bad, if everyone had a large supply of spoons. I know, for me, my spoon supply varies, depending on how well I am.

So, something as simple as a shower, probably seems easy peasy lemon squeezy, for a healthy individual, but could be beyond daunting for a Spoony (Chronically ill person, that generally has a limited spoon supply daily). That day in particular, as we were cleaning up our bedroom, and putting away laundry, I had Chad bring me a box of books from my favorite author, and I (finally) put them up on the shelf, I had Chad hang in our room.

He got the heavy box down, off the top of the hallway linen cabinet, carried it to me, and I placed the books on the shelf. I was instantly overjoyed, that my books were finally where I wanted them, and my heart was happy. Chad remarked on my excitement, and said I could have done such a simple thing, on any given day. Obviously, he cannot understand something he's never experienced, especially if I've never told him detailed explanations of it.

I told him to remember that moment. How, for me, getting my books onto the shelf was monumental, but to him seemed like no big deal. I explained how, I have a minimal spoon supply, and since injuring my Meniscus, I had even fewer. I told him, the book task probably took him only part of one spoon, but had I gotten the box down, carried it to the bedroom, and shelved the books, it would have required multiple spoons, and I probably wouldn't have even been able to get them off the cabinet.

I try to save my spoons for super important things, and I use them carefully. I remember when I had a seemingly limitless supply of spoons, tasks took partial to one or two spoons, and I'd often have some left at the end of the day, and that was with purposely adding in extra activity, to maintain my health. I miss those days. If I had known I would have a limited spoon supply one day, I'd have taken the little things less for granted, and I'd have done more.

Despite how impossible it seems, I keep hoping that one day, I'll start having more spoons on a daily basis, so I no longer have to ask for so much help, or put off doing simple things, so that I have enough spoons for more valued activities. It is sad, when simple tasks, like eating, bathing, using the restroom; requires so much effort, that they often lead to feeling triumphant once complete.

I know that it's just wishful thinking, that one day I'll have an increased daily spoon supply, and simple tasks, will once again be simple. I cannot help it. I am an eternal optimist, who not only thinks anything is possible, but also believes in miracles.

How about you, what do you have wishful thinking about?!


Here are the links to the other 'Wishful Thinking' posts: 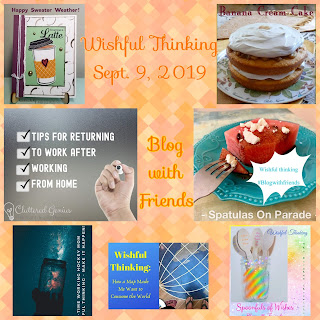 Karen of Baking In A Tornado shares her recipe for Banana Cream Cake.

Kia of The Ground Beneath My Feet shares Wishful Thinking: How a Map Made Me Want to Consume the World.

Lydia of Cluttered Genius shares Tips for Returning to Work After Working at Home.

Email ThisBlogThis!Share to TwitterShare to FacebookShare to Pinterest
Labels: Blog With Friends

Welcome to the first Blog with Friends of 2020. This is a blogging round-up, that is the brilliant idea of Karen of Baking in a Tornado, and... 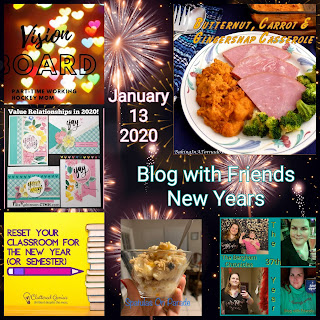