Welcome to April's Blog with Friends Round-up!! Each month, a group of us bloggers gets together, chooses a theme, and then creates our own unique posts based on that theme. The posts can include anything from recipes, crafts, DIY projects, poetry, creative writing... Anything imaginable. The sky is the limit. This month's chosen theme is High Five Day, which is on April 19th (third Thursday in April). 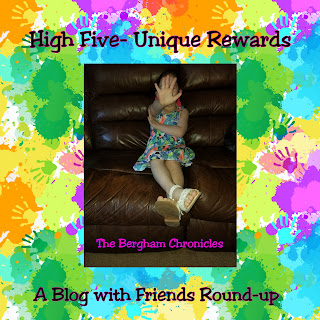 Well, my cooking is nothing special, and I create using other people's recipes, and really do not create original recipes. I am not the best crafty person, and often just recreate other people's craft ideas. I am not great at DIY projects. So, my Blog With Friends posts tend to be lists. This month is no different. When I think of a high five, I imagine a celebration after a job well done. So, I have decided to share five unique rewards, for when your kid does a great job! You can give them a high five, and possibly one of these unique rewards.

In general, when I think of rewards for my kid, I think of money, candy, a new toy, a trip out for an ice cream, stickers, or a trip for Boba Tea. Just very simple things she loves. So, I wanted to think outside of my regular reward box, and come up with some ideas that aren't every day rewards.

1. For some reason, the first idea that popped into my head, was a trip to the Mud Mill. That is one of our local pottery painting places. They have fun pottery pieces, ranging from cups, ornaments, piggy banks, cookie jars, and platters, to just about anything you can think of. So far, Gigi has painted a Jack-o-Lantern candle holder, large coffee mugs for Chad and I, and a shark piggy bank. We try to go at least once a year, so I am sure the list of her creations will grow. Going there is definitely a treat for her, and I honestly think it would go over well as a reward.

Have you ever gone to a pottery painting place? I highly recommend it. Gigi has so much fun. I actually want to paint something the next time we go. I usually just help Gigi out, but now that she has gone several times, and spent time painting Kindness Rocks, I think she is comfortable enough with painting, to do her own piece. So, I will definitely keep this is mind, for the next time she has earned a special treat, for a job well done. I think a fun Mommy and Me date, would be awesome.

2. I know in some families, kids have a lot of say in what the family eats for dinner. Growing up, I had no say, and Gigi really has no say in our dinner choices. Now, we do eat spaghetti quite often, and it is because not only is it an easy, delicious meal, but Gigi loves it. I am sure if she did not love it so much, we would not make it quite as often. So, I think for Gigi, being told she can pick dinner, anything she wants (within reason), she would consider that an awesome reward.

We will probably end up eating Ramen or spaghetti, or possibly going out to Red Robin. I am certain her first suggestion will be chocolate or ice cream, which is why I will definitely add the "within reason" disclaimer. Though, something tells me, if it were within Daddy's reason, ice cream would probably be allowed.

3. My next idea, may not be easy for some of you, depending on where you live, but I think a beach day would be an awesome reward. I know that Gigi would be over the moon happy. We live in California, and the beach is not far at all, but we do not go as often as we should. So, it would still be a major treat for her. The reason I thought of this idea, is because when we asked her what she wanted to do for her birthday this year, she chose a beach day. Figuring out just how much she loves the beach, has made me make a mental note, to try to fit in more trips to the beach.

So, if you live close enough to the beach, for this to be an option, I definitely think it would a well appreciated reward. Plus, it is a day at the beach, which will be like a reward for you as well. Well, unless you aren't a fan of the beach. Though, in truth, I am not sure I know anyone who is not a fan of the beach.

I also know that while eating that cake, I felt special, and it felt like a fun treat. It was my birthday, and I would eat cake if I wanted to. I have survive thirty-five years, and I deserved it. So, I think another kinda crazy, but super cool reward, could be to choose anything the want for breakfast, within reason, but possibly not quite as within reason as the dinner option.

Want a slice of cake? Okay. A bowl of ice cream? Okay. A cookie? Sure. Let them pick some super awesome breakfast idea, and let them have it. I honestly would probably still say no to candy, but anything else not too crazy, I would allow. This would probably mean that Gigi would be having cookies or maybe ice cream for breakfast. Probably cookies. Most like Famous Amos Chocolate Chip cookies.

5. So... I tend to like to be in control of things. I am honestly not a super control freak, but I do like to know what is going on. I definitely am a planner, and I try to keep things planned and organized. So, I had a few ideas for my fifth one, and then I rethought it, because I wanted to suggest the best option. The thought crossed my mind... What would Gigi pick?! Then I had this idea... Let the kid choose the reward. Tell them their reward is too pick whatever reward the want, and as long as it is mostly reasonable, and possible, than that can be their reward.

I actually cannot wait to do this with Gigi, because I genuinely curious to know what she picks. It will probably have something to do with ice cream, staying up late, or cookies.

So, there you have it. Five possible rewards for a job well done, that aren't necessarily the typical rewards.

How about you... What list of reward ideas would you give me? I am always open to new ideas, especially now that Gigi has started soccer, and will be starting school. I am hoping we have plenty of reasons to give her rewards in the future!!

I was originally going to list a trip to the movies, because as a kid, that would have been an amazing reward in my eyes. However, the last two times I tried to take Gigi to the movie, she asked to do something else instead. Though, I still think it would be an awesome reward, and deserved an honorable mention in my post!

Now, take a peek at the other blogger's posts, featuring this month's High Five Day Blog with Friends Round-up!! I will meet you there, right after I get a coffee refill!! 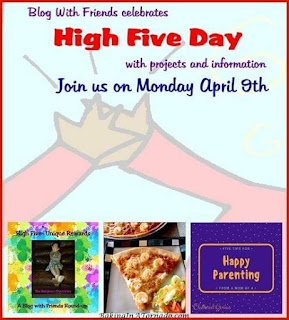 Karen of Baking In A Tornado
Rosemary Infused Shrimp Scampi Pizza
Lydia of Cluttered Genius
Five Tips for Happy Parenting
By Jules B at April 09, 2018