Welcome to this week's #TopTenThursday. This is a fun writing challenge, that is hosted by Tamara of Confessions of a part-time working mom. Her, myself, and other bloggers, come together and post Top Ten lists, which we create based on a chosen topic. I hope you enjoy reading my list, as much as I loved creating it. 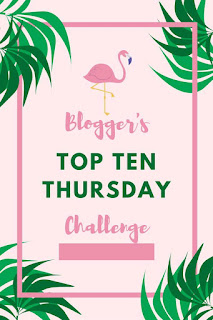 Last week, we made a list of our Top Ten Happy Places. This week, we are revealing our Top Ten 80's Songs. I don't know how you guys feel, but I definitely love music from the 80's. I am a total 80's baby! Music is a huge part of my life, and many of my favorite songs are from the 80's and earlier.

Without further ado, in random order, I present my top ten 80's tunes. Be sure to check out the other Blogger's favorite tunes, using the links at the bottom.

1. (This is technically a cheat. It was released in 1977, but it was HUGE in the 1980's, and I was told it was acceptable) 'One Love' by Bob Marley. This song is probably my theme song. I so believe in it. I believe in peace and unity. I believe in loving everyone. I believe in not judging. I am against racism, sexism, etc I feel like we should all live together in peace and harmony and acceptance. Love over hate,  every day.

2. (I am slipping this 1977 song in under the same technicality) 'Waiting in Vain' by Bob Marley. This is MY song. My absolute favorite song. This is my ultimate favorite song, and it has been since I was a kid. I have just always loved it. I can feel it in my soul. It is amazing. Amazing.

3. (1983) 'Islands in the Stream' by Dolly Parton and Kenny Rogers. Absolutely LOVE this song. I always have. I always will. Dolly is my girl. LOL Well, I would like to think, if we ever met, we would be instant best friends. I LOVE LOVE LOVE LOVE her.

4. (1989) 'Janie's Got a Gun' by Aerosmith. I am a massive Aerosmith fan(atic). I love 80's hair bands, and Aerosmith was my absolute favorite of them. This song is my favorite of their's. I love so many of their songs, but this will forever be my favorite. It just speaks to me on a deep level. Some songs you can just feel. Add to that the vocals and the instruments.... WOW! I just LOVE this song. In fact, I am putting it on RIGHT NOW. Just talking about it, makes me need to hear it.

(cue break to totally rock out to #4)

5. (1986) 'Walk This Way' by Aerosmith and Run DMC. Now, I do love Aerosmith's version that was released in 1975, but the Run DMC collaboration, will always be my favorite version. It was so mind blowing to me. As a kid, and once I got older, to hear rock and rap combined. It really opened my eyes to how universal music is, and how artists can cross boundaries and genres. Seriously. Now, Steven Tyler even has a country album. This song was just groundbreaking, and it is truly a wonderful song.

I would now like to take a moment to say, I think making someone create a top ten list of favorite 80's songs, is kinda cruel. How on Earth can I just pick ten?!? I only have four spots left, and I have like a million songs left to list. *sigh*

7. (1985) 'Take On Me' by a-ha. I do not care who you are... You know this song and most likely know the video as well. How could I not put this song on my list?! I have spent HOURS dancing to this song. HOURS. Like hundreds of hours. Great memories with my cousins.

8. (1984) 'What's Love Got to do With It' by Tina Turner. This song was magic for me. I loved it. I loved it so much, I would stand in my living room for hours, singing it on my dad's microphone. (My dad is a musician.) I love it so much I choreographed a dance to it. Her voice. The music. So much perfection.

9. (1986) 'Diggin' Up Bones' by Randy Travis. Have mercy on my soul... Randy Travis has one of the most amazing voices EVER. I love basically every single one of his songs, but this one will probably always hold a very special place for me.

10. (1987) 'She's Like the Wind' by Patrick Swayze feat. Wendy Fraser. Y'all.... Listen... Patrick Swayze was my first crush. Dirty Dancing was my first ever favorite movie, and to this day, it remains my favorite movie. This song, Patrick, that movie... So much a part of my childhood. I could not put this song on the list. It was an instrumental part of my childhood. I never stopped loving Patrick. I guess you never really forget your first crush. Plus, let's face it, he was always a handsome man.

11. 'Total Eclipse of the Heart' by Bonnie Tyler. I am giving eleven on my list, since my first two, were technically songs of the 1970's, and should technically count as just one entry. Even though this is not my actual favorite song, I think that it is one of the greatest songs ever recorded, hands down. It is absolutely amazing. Bonnie put her whole being into this song. She gave it her everything, and it showed. It is one of those songs that I could listen to on repeat for hours, and not get tired of it. I could not make a list of 1980's songs, and not list this one.

I am sorry, but I have to make a list of honorable mentions... I really could not just do ten eleven.

I could go on and on and on. I won't. I just want to list one more. (1985) 'Greatest Love of All' by Whitney Houston. This song will forever and always be very special to me. Growing up, my mom was obsessed with Whitney and she played this song on repeat. My actual first ever memory of music, is this song, and that is special. I was obsessed with it. I loved her voice. I loved everything about it. I remember wanting to be a singer one day. Her voice was that amazing to me. I became obsessed with this song, and eventually obsessed with music in general. This was my gateway song.

Chad was not impressed by my list, so he has given me the following list, which includes songs he feels I am ridiculous for not including them in mine.

Okay, okay. I have kept you all far too long. Now, go and see what songs from the 80's these other bloggers LOVE!

Confessions of a Part-time Working Mom

The Wrights' Days of Fun