Welcome to March's Secret Subject Swap. This week, seven awesome bloggers and myself, picked a secret subject for someone else and were assigned a secret subject to interpret in their own style. Today we are all simultaneously divulging our topics and submitting our posts. 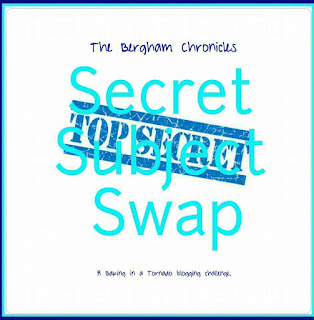 You can be a fly on the wall in one person’s house while their family eats dinner. Who would you choose to peek in on and why?

It was submitted by: Karen of Baking in a Tornado (Thank you for this awesome subject! You really put my brain to work!)


This subject is not as easy, as one may think it is. Well, at least it was not easy for me. Not because I could not think of an answer, but because I could think of many answers. So, then the problem became to narrow it down to one answer. So, as I often like to do, I have decided to share my thoughts with y'all, as I work to pick a final answer.

My first thought was probably Matt Damon. So, one could say that I should pick him, simply because he was my first thought. Now, obviously, the why for him, is because I adore him, and I am very curious of what he is like, when he is just being himself, with those he loves, away from any public spotlight. A family dinner would be a great environment to get a glimpse of the real Matt. I think dinner with him would be wonderful. I think he probably has a lot of interesting things to talk about, and he probably is very funny. I wonder how he chews though. I have a huge issue with loud, messy eaters. Maybe seeing him eat would tarnish him in my eyes?! I sure hope not. In my mind, he is a quiet, neat eater.

The second person to come to my mind was Donald Trump. I am just going to say, that I think it is entirely possible that he is a noisy eater, and that will drive me crazy. However, I would absolutely love to see him out of the spotlight. When his guard is down. When he is being completely his true self. When what he says is his own honest thoughts. I think he is a terrible person. I have a feeling seeing him eating his dinner, with his family/friends, will only confirm this. However, it could show me a different side to him. It could reveal some important information. It could help me understand things more. It could do a lot of things. So, I definitely think that is a solid reason for wanting to be a fly on his wall. Of course, I could end up watching him eat alone. Maybe see him tweeting out crazy statements, as he chows down on a steak. That would not reveal very much to me, and would be a waste.

This brings me to a thought I had multiple times, as I pondered people I could peek in on.... I definitely hope I have some control on the circumstances. For example, I definitely want to watch the person eating a meal with others. I want to be able to hear conversations. Get information. Get a glimpse into the person, while they are relaxed, and surrounded by people they are at ease with. So, of course no formal dinners, surrounded by strangers. Just a simple family meal, or a meal with close friends, and in Trump's case maybe business associates. If I have to be a gross fly for a bit, I definitely want the experience to be worth it.

Another person who quickly came to mind, was Oprah. I think it would just be amazing to watch her talk and laugh. I think she is a genuinely interesting person. I feel like hearing her talk could be insightful and wonderful. Plus, I just would love confirmation that she is as amazing as I suspect.

Thinking about Oprah, led me to thoughts about Ellen DeGeneres. She is definitely someone I would love to meet. That will probably never, ever happen, so being a fly on her dining room wall could be awesome. I cannot help but think she is amazing, and hilarious, and getting to see her in a relaxed setting would probably be hilarious and insightful.

This is where I will tell you that I spent several minutes pondering what it would be like, to be a fly on the wall, watching Oprah, Ellen, and a few of their closest friends having dinner together. That would probably be one epic dinner party. I bet I would laugh and cry and just simply be blown away. So much awesome in one room.

Of course other awesome people crossed my mind.... Bill Gates, Elon Musk, Stephen King, Julia Roberts, Stephen Hawking, Jimmie Johnson, Chrissy and John Legend, Howard Schultz, Elon Musk, Sara Ramirez, Shonda Rhimes, Adele, Ed Sheeran, Tje Austin, etc etc I could think of so many people, who I would just love to be in the same room as. Just to see them, and get a glimpse of them in a relaxed setting.

Of course I thought of some people who I would also love to glimpse in a relaxed setting, but much in the same way, as I would like to see Donald Trump... Just to get an honest, unedited, truthful look into them as a person and their thoughts... To see if my opinions of them are accurate or not... Maybe even settle some fears, or unfortunately strengthen them.... Putin, Paul Ryan, Bernie Sanders, Hillary Clinton, Mitch McConnell, Kim Jong-Un, Mike Pence, Cory Booker, etc etc I think we can all admit... Getting to see a politician being their honest, truthful self... Speaking freely their genuine thoughts, ideas, and intentions... Well, that would be a great experience. It could potentially be terrifying, but I think the enlightenment would be worth it.

Pondering that group of people, brought me back to wondering about the limitations of my abilities. If I did visit Kim Jong-Un or Putin, for example, would I be able to understand what was being said?! Am I limited to just people who speak English?!

Then I began thinking about my loved ones back East. My mum Rosemary, my sisters, my Mom, my Dad, my step-dad, my aunts, my uncles, my cousins, my niece, my nephews, my friends... So many people that I love and have not seen in years. What if I picked some of them. I probably would not learn anything too interesting, but I would at least get to be in the same room as people I love. Could I choose them all, and get to be a fly on the wall at a huge dinner party?! It really would be nice to just see everyone I love up close. Hear their voices. I miss so many people. This could also be a bad thing, because it would be very hard to simply observe people I love from so close. I would absolutely want to physically be there. In a room of strangers, famous people I really do not know, simply observing would not be too difficult. In a room of people I love most, simply observing would probably be emotionally painful. Though, something is better than nothing. So, maybe if that were my only option, I would be able to handle it.

Then I began to think about the very bloggers I participate in these challenges with. How cool it would be to watch them eat dinner with their loved ones. Listen to their thoughts, ideas, and jokes. Listen to them laugh. See their yummy meals. See their loved ones, who I have read so much about. I think any one of them would make for an interesting time. Albeit, I think of all the options, this one would make me feel the most intrusive. I would honestly hope that I did not overhear anything too personal. The guilt that I feel at the thought of this option, probably ruined this one. On one hand, I would definitely love to see them up close, but on the other, I would definitely feel like an intruder. Though, maybe I would feel less bad, if it were just all of them in one room, eating together. No families. Just my blogger buddies? Then I would run into the same problem I did with my loved ones.... I would really want to be THERE.

With every option I pondered, there were pros and there were cons. I did quite a bit of thinking and rethinking. Analyzing and over analyzing and then analyzing my over analyzing. So many options and possibilities. At the end of the day, or should I say, at the end of my train of thought, I decided that I would want to observe Donald Trump. I would hope to see him being completely himself, completely open, and completely honest. I would hope that I would get to be a fly on his wall for quite a good amount of time. Not just a fifteen minute quick bite to eat. I would also rather see him with his political/business associates. I would rather not see him with his family (I know this goes against how the question was asked, but I think a rule being bent occasionally is okay, and I honestly have the best of intentions with this bending of the rules). I would hope it were with the people he is closest too, confides in the most honestly, and people who would give me the most insight into him. I want to know his motives. I want to know the whole truth. I do not care if it confirms my suspicions, or proves me to have been wrong about him. I just want the truth. I think the current uncertainty that looms over me, is horrible, and to just finally know some truth, would be refreshing.

How about you? If you could be a fly on the wall during some one's dinner, who would you pick? Why them?


Here are the links to all the blogs now featuring March's Secret Subject Swap posts.  Sit back, grab a drink, and check them all out. You know the drill... I will meet you there, as soon as I refill my coffee cup!!