So, I have another book review for you! This time it is a book by Marilyn Lakewood. This was my first book of hers, which I have read, but it will not be the last. I thoroughly enjoyed this book. Marilyn has a great writing style. It was an easy to read, entertaining book, and it did not disappoint me.

I honestly think you will fall in love with the characters in this book. I found myself really liking Sophie, and I became invested in her search for a Dominant. I also really found myself liking both Dex and Jake. I really found myself cheering them both on, in their attempt to win Sophie over. Marilyn did an awesome job developing the characters, and giving us a really good feel for who they are as people. I have a definite favorite of the guys, and I would love to hear which one was your favorite. Despite having a definite favorite, I found myself wanting them both to win her over.

This book is HOT, HOT, HOT. If you don't like steamy, hot romances, you may find it difficult to read this book. However, you could easily skim those parts, and still really enjoy the story as a whole. There is much more to this book than just the steamy parts.

I definitely recommend this book!! If you do read it, please let me know what you thought!! I would love to discuss this book with others!!

Please keep reading, to find out how to get this book for yourself, learn about the author, and read a synopsis and an excerpt from the book. 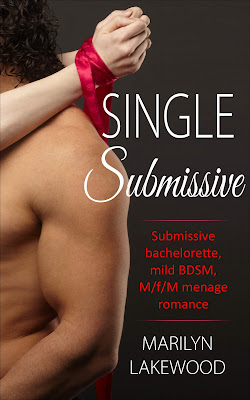 Book: Single Submissive
Author: Marilyn Lakewood
Genre: Dominant/submissive ménage romance
Release Date: 28th February #SingleSubmissiveTour
Synopsis
A television dating show? What sensible woman does that? Desperate times force drastic measures as thirty-two-year-old Sophie Baxter searches for Mr. Right Dom. But for a shy submissive, five weeks on a reality show might be a bad decision. One decision is easy, however: the Dom she chooses won’t be an actor. Dex Hampton… successful film actor, coveted bachelor, and England’s sexiest export, but for this mysterious, reserved Dominant, fame isn’t a goal. Finding the right submissive is his top priority, and he’ll do anything to get his girl. Jake Sinclair’s golden good looks and rakish Aussie charm fuel his flourishing acting career. He does his own stunts and tackles life full on. He’s achieved everything he’s ever wanted, except finding the right submissive. When he sees Sophie, nothing will stop him from winning her. Not even the competition of his longtime friend and fellow Dominant, Dex Hampton. As the entire world watches, two movie superstars compete for a beautiful submissive who is ready to yield in all ways but one: she will not have an actor as a Dom.

THE GIRL… Sophie
“I entered my name as a contestant for the new bachelorette reality show, The Single Submissive.” Sophie kept her voice as quiet as possible.
Across the table her best friend stopped chewing and blinked up from her plate. Elise’s throat bobbed as she swallowed. “You did what?”
“That new show… with submissive bachelorettes. I applied to be the bachelorette.”
“Wow, I’m… surprised is an understatement. Considering how shy you are. I mean, you’ll be in front of millions of people, and they’ll all know you’re a—”
“Sub? Yes,” she whispered.
Elise whispered too, but it came out more as a hiss. “See? You can’t even say the whole word out loud in public. How can you think you’ll be able to go on national television and talk about your most intimate life?”
“I have very good reasons for doing this.”
“Such as?”
“I’m broke.”
“No, you’re not! You’re the best costume designer on the West Coast.”
“Shh.” Sophie put her finger to her lips. “I’m meeting expenses, but I have no savings. I need to think about that now.”
“Uh oh. That’s what this is really about, isn’t it? Your last birthday?”
“No, of course not.” Well, maybe. The words old spinster flashed in her head.
“It is! You think thirty-two is over the hill, don’t you?” Thirty-five-year-old Elise looked affronted. But her friend was stunning, and Elise had a forty-five-year-old Dom who was one of the hottest, classiest men Sophie knew. Men like that didn’t fall out of the sky.
“No, of course not.” Sophie would never look as glamorous as Elise, though, no matter how many birthdays. “I’m just feeling a little low, that’s all.”
“So you thought going on TV and telling the world you’re a subbie would help?”
“No… Well, maybe.”
“Okay, truth time. Why are you doing this?”
“I’m lonely.” She sagged back into her seat.
“Aww, girlfriend, you had that cute suit chasing you around last month. I know you’re cautious, but he seemed solid and nice.”
“He was nice, just not a Dom.”
“How do you know?”
“I asked him.” Her cheeks burned with embarrassment recalling the evening. “He got that look in his eyes—the one of a polite vanilla person out of their depth with kinky. I don’t blame him. We all have our preferences and limits. My wanting a Dom was out of his comfort zone. I understand.”
“So you told him it wouldn’t work?”
“Yes.” And now she was lonely… again… but it wasn’t fair to start something neither could be happy with.
“We should go to the club. Maybe you’ll meet someone this time.”


Sophie started shaking her head the moment she heard “club.” That had been awkward and unproductive. “No, I never catch anyone’s eye in that kind of environment. At least no one I’m attracted to.” Elise’s flashy looks grabbed attention, but Sophie was just pretty—average face, average figure. Mr. Right Dom had not come walking out of the dim interior and offered to collar her. “I need to explore a new gene pool, or Dom pool.”
Meet The Author
Marilyn and her husband live in the northwest U.S., not too far from the Canadian border. She thinks the long, cold winters are perfect “writing weather.” Most of the time, she doesn’t mind the short days, or the snow—except when she needs to drive in a blizzard, in the dark. Marilyn started writing sexy stories “just for fun” and she’ll joyously admit she’s obsessed with creating hard-core dominant heroes and happily-ever-after endings. Writing erotic romance lets her explore love, passion, and sex, through the lens of different characters and settings. It’s also a way to keep her imagination kindled during the September to March “cold snap.” Marilyn loves music, flowers, sci-fi and romance movies, and taking daily walks with Precious, her rescued dog. She’s a country girl at heart, and although she imagines travelling to distant, romantic shores, her favorite place is home with her family. 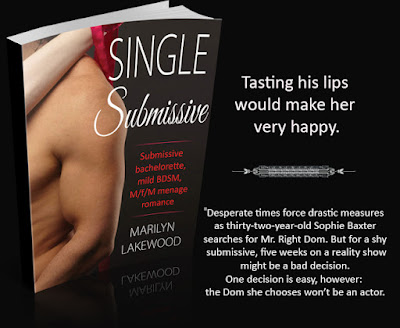 What I need you to know.... I was NOT paid to give this review. I received a FREE ARC of the book, and all I was asked to do, was give an HONEST review of my opinion. The opinions expressed in this post, are my honest feelings about the book.
By Jules B at March 10, 2017