Welcome to May's Use Your Words blogging challenge. This is how it works: participating bloggers picked four to six words or short phrases for someone else to craft into a post. All words must be used at least once and all the posts will be unique as each writer has received their own set of words. That is the challenge, here is a fun twist; no one who is participating knows who got their words and in what direction the writer will take them. Until now. 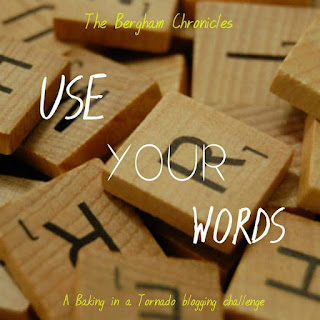 It was submitted by:  https://dlt-lifeontheranch.blogspot.com/ (Thank you for such awesome words!!)

I know before I even looked at my words, what I was going to be writing about. I knew I would just have to make the words fit what I needed them to. So, when I opened the e-mail, which contained my words, I was a bit nervous. I decided to actually wait until I was ready to write my post to open it. I did not want the words to weave their way into my brain, and make me doubt my post idea. So, I was actually happy when I read them, that they could fit into my blog post idea, mostly painlessly.

Why did I know what I was going to be writing about? I looked at the date we would be posting on, and noticed immediately, it was the day after my tattoo was getting finished. So, I figured it was perfect. I could walk in the house, from getting my tattoo finished, sit down, and write this post using my words, and sharing a picture of my tattoo. If you follow my Facebook page, you have actually already seen it. You also saw the first session results, and you know some of the meaning behind the tattoo.

I really just wanted to give more details about it, and post up the pictures. I will tell you know, I will be updating this post in a few weeks, once it is fully healed, and I will post a totally healed picture at the end.

If you know anything about me, you probably know that I love coffee. I am pretty vocal in my love for the delicious beverage, and so I think it is a fairly commonly known fact. Two years ago, I got my feet tattooed. My left foot says Hope with an infinity symbol. Cliche but I love it. I try to live life with infinite hope. My right foot says L;ve. Live. The "I" is a semicolon, because I joined in the Semicolon Projects mission, to spread the word. Your story is not over, keep on living, and get help if needed. Do not choose death. I have gratefully chosen to live several times, and I am grateful for that.

Not long after I got them done, a Friday the thirteenth was approaching, and the tattoo place was holding a special on tattoos. I saw a coffee cup on their poster, and I wanted it. I was thinking about it, and I was just really wanting it, but I knew I wanted more to the tattoo. I just had no idea what. Two of my friends, totally talked me into getting it. I told them I did not know what I wanted the tattoo to be, as a whole, but that I wanted the coffee cup to be a part of it. They told me if I did not get the cup, and start the tattoo, I would never actually get it.

So, I got the coffee cup on Friday the thirteenth. I did not get it colored in or anything, because I still did not know what exactly I wanted it to be as a whole. Later that same day, I went with my friend to get a tattoo, and she paid for me to get a shark tattoo on my other arm. Sort of forcing me to get my arm tattoos done, since I had the start of them. Well, it has been two years, and I finally got my coffee tattoo completed. My shark is still not finished, and I really have not fully thought of the entire piece, only part of it. Give me two more years, and hopefully, I will be writing a post about that one.

Back to my coffee cup. I knew immediately I wanted to get #1 Mom written on it. Gigi loved the tattoo, and was forever "drinking" the coffee from it. She has also spent the last two years, stealing sips of my real coffee, every single chance she gets. She LOVES coffee. I started drinking coffee at five, so she comes by the love honestly. So, an idea formed in my head.... Get a W on the cup (Gigi's real name begins with a W. Gigi is from her middle name!), and get a bigger cup next to it with #1 Mom on it, and fill in the space with something else. I did not know what else. The cup of coffee had steam coming off of it. I then decided my cup of coffee needed to have steam, and the steam needed to meet and form a heart.

So, as you can see, the complete idea was coming to me. I wanted the tattoo to be more about Gigi though. How?! I did a lot of brainstorming. About a year ago, I finally knew what I wanted, but was not sure it would work. I then received a $200 gift certificate, to one of the artists I follow on Facebook. He owns the studio where my neck tattoo was done. So, I finally decided to use it to complete my Gigi tattoo.

I went to see him, schedule my appointment, and talk over my idea. To my surprise, he supported my entire idea, and was actually excited about it. So, I scheduled my appointment, and it was ON. I went last month, and had the first part done. A W was added to the cup, my #1 Mom cup was added, some flowers were added in to fill up the space, the steam formed a heart between the cups, and it was perfect. It was done in black, so it looked like a page from a coloring book. 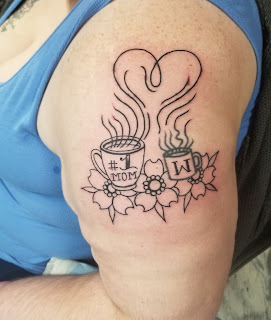 After the first part healed fully, Gigi colored on it with markers, and we took pictures. I brought the pictures into him, and he printed out the one we decided was best, and then he inked her artwork directly onto my arm. My tattoo was her coloring book, and now it will be with me forever. Letting a four year old create my permanent tattoo, is actually not the craziest thing I have ever done. Plus, I honestly think it turned out well. I may be a tiny bit biased, since I gave birth to the artist, but I don't think I am wrong. 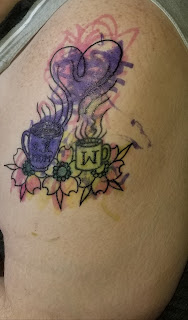 I knew now was the time to get it done, before the Summer heat fully hits. You do not want to be sweaty and sore. You also do not want to be surrounded by so much sunshine, that sunscreen is necessary on a not yet fully healed tattoo. So, really this was perfect timing. Getting my Gigi tattoo right before Mother's Day.

Honestly, seeing my idea come together so well, really makes my heart happy. It is safe to say that Gigi is pretty darn heart happy as well. Oh, and she has added tattoo artist to the list of things she wants to do, when she is older. So, in case you are keeping track, we are now at Astronaut Doctor Mom who is a rock star and tattoo artist on the side. Plus, when she lists it all, she adds in "and drinks lots of coffee". Listen, Promiscuous Pirate is not in there, so I think I am doing mostly good. Plus, I like that she wants to be a mom, because that gives me hope for being a Grandma. I can totally live with that. In like twenty five years.

Now, make sure you go check out what words everyone else received, and how they crafted them into a post. I will meet you there, right after I go refill my coffee cup, and whine a tiny bit more, about how sore the fake coffee on my arm is.

Baking In A Tornado
On the Border
Southern Belle Charm
The Blogging 911
Cognitive Script
Part-Time Working Hockey Mom
My Brand of Crazy
Climaxed
By Jules B at May 11, 2018