Welcome to July's Secret Subject Swap. This week thirteen awesome bloggers picked a secret blog subject for someone else and were assigned a secret subject to interpret in their own style. Today we are all simultaneously divulging our topics and submitting our posts. 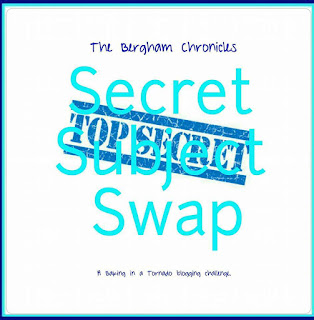 My “Secret Subject” is:
What were you obsessed with as a child (favorite toy, TV show, food, etc.) and why?


It was submitted by: http://www.angrivatedmom.wordpress.com/ (Thank you for such a fabulous subject prompt!)

I honestly cannot think of anything from my younger days, that I was obsessed with. I mean, I did want to marry the Incredible Hulk. Once I was older, and discovered it was Lou underneath, I was not quite so into the idea. I think that is probably weird. I really wanted to marry this green hulk of a person, but was not so into the actual human underneath. It was a brief love affair. A not so brief one, was when I wanted to marry Beast, from the TV series, based on the Beauty and the Beast characters. Well, I got older, and discovered that underneath Beast was Ron Perlman, and I would honestly still marry him.

So, when I really think about myself and obsession, only two things come to mind.... Coffee and Matt Damon. Coffee is a given. I started drinking coffee when I was five. I would drink it every chance I got. I was a bit lucky. My dad constantly had a cup of coffee in his hand, and so I got many opportunities to "steal" sips.

My Matt Damon obsession began while I was sitting in the movies with my sister Luci. We went to see Good Will Hunting. I was obsessed with him nearly instantly. Anyone who knew me back then, will tell you... Obsession is the only way to explain it. Now, I am thirty-four, and I have grown out of it. Not. I am seriously still obsessed with him. Lucky for him, my obsession these days is quite different.

Back then, I read every single piece of material I could find about him. Magazine articles, books, blurbs in the newspaper. I watched all his TV appearances. I owned so many books and magazines, it was probably a tad ridiculous. These days, I just get giddy when I see him in a movie or on TV. I keep an eye out for him in the news. I am still very obsessed, it is just a healthy obsession.

I think the odd part of my obsession, is that I do not want to be his wife. That is a good thing, considering he is married and a father. I really just want to be his best friend, which is unfortunate, because that has been taken by Ben for ages. So, I don't stand a chance, but a girl can dream. Plus, people can have more than one best friend. So, there is still some hope for me, right?! Right.

I just think Matt is the most amazing human being. His parents obviously did an amazing job raising him, and he really has become one of the greatest human beings to ever live. I absolutely adore him. As Gigi's mom, I often find myself hoping that she grows up to be so much like Matt, and I often genuinely wish I would run into him, and he would instantly feel the BFF connection, so he could have an influence on Gigi. Okay. So, maybe my obsession is still a bit crazy. Sigh. Fine. So, yes, over twenty years later, and I am still OBSESSED with Matt Damon.

I think it is probably fitting that my two biggest obsessions are Matt Damon and coffee. Absolutely two of the greatest things in existence. Not that Matt is a thing, but you know what I mean, I am sure.

So, take it from me, if Matt isn't a huge blip on your radar, you need to fix that. However, don't get it twisted.... He is MINE. I have always staked claim on him, which is kinda weird, since I don't technically want him. I want his friendship. So, don't get that twisted. If he is going to get a new friend, it is going to be me.

Also, as a little side note... Of course my sister Luci had a crush on him, and so we would "fight" over him. He ended up marrying a Luci (Luciana). For a year or two, I was bummed he didn't marry a Jules. It kinda feels like him marrying a Luci, means that my sister won. So not cool. Also, the names of his children, are some of my favorite names, which only solidified my belief that he is AMAZING.

In truth, he only has one real flaw. Albeit, it is a massive flaw. He just happens to be a fan of the Patriots and Tom Brady, and that is a massive flaw for sure, but he is just so AMAZING, that the good outweighs the bad. So, I let his poor taste in football teams and players slide, and I just hope that whenever we meet, and he realizes how imperfect I am, he can just let the imperfections slide, and we can be best friends.

I am just kidding. Kind of. I mean, I am basically just joking, but I am also serious. Would I love to meet him?! Yes, please. Would I love to be his best friend?! PLEASE PLEASE please please. I just know that life does not work that way. The likelihood of me actually meeting him, is not that great. The likelihood of us meeting and it being significant enough for a friendship to blossom, is even less. The likelihood of he and I actually being compatible enough to be best friends, well, let's just say that is not very likely at all. However, I am certain, that if I were ever to meet him, it would be the second most amazing thing to every happen to me. Giving birth to Gigi is unable to be topped ever, not even by Matt.

So, if you don't know much about Matt, you should look into him. I think you will like what you find out. Also, check out water.org!! Watch his movies!! Learn about him!! Your life will be better for knowing him. :)

I mean, he really is quite perfect!! 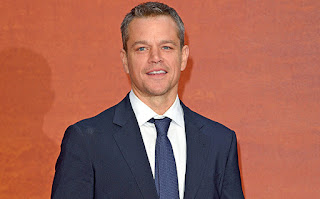 So, to answer the question... I was, and I am, obsessed with Matt Damon. Why?! Well, because he is the most amazing individual I have ever had the pleasure of being obsessed with. He makes the world a better place, and by learning about the person he was, when I was a teenager, I grew up to be a better person, than I would have been had I never known about him. The rest of my why can be found in the below videos. I mean... How could I not be obsessed?!


So, yes, as you can see my obsession is totally justified. I hope you all have an amazing Friday and a fabulous weekend!!

Here are links to all the other Secret Subject Swap posts for July:

Baking In A Tornado
Cognitive Script
The Blogging 911
The Lieber Family Blog
Simply Shannon
Southern Belle Charm
Never Ever Give Up Hope
The Angrivated Mom
Not That Sarah Michelle
Bookworm in the Kitchen
Part-time Working Hockey Mom
Climaxed
By Jules B at July 07, 2017