Put Your Back Into It #FunnyFriday

Today’s post is December’s Funny Friday, a regular feature published on the last Friday of every month. This is the last one for 2017! Funny Friday is a collaborative project. Each month one of the participants submits a picture, then we all write five captions or thoughts inspired by that month’s picture. Links to the other bloggers’ posts are below, click on them and see what they’ve come up with. I hope we bring a smile to your face as you start your weekend. 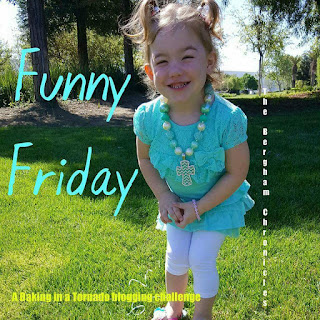 Here’s today’s picture. It was submitted by Jules of The Bergham Chronicles ... Yep, that's me! :)

1. Gigi: You call that effort?!
Me through gritted teeth: Yesss.
Gigi: Effort smeffort. Put your back into it. Push!
Me, glaring: You are proof positive I know how to push well. Now, hush.
Gigi: But Ma, you told me to help you.
Me: We have different ideas of help.

3. Gigi: C'mon, Mom. You're acting like it is actually hard or something.
Me: It is hard.
Gigi: Not that hard.
Me: *grumbles and tries harder*

4. Me: How many was that, Gigi.
Gigi: Um. I don't know. I lost count.
Me: What?! You said you would count.
Gigi: I was busy posing for pictures.
Me: Pictures? Now? While I'm dying.
Gigi: Well, I think it was like forty eleventy nine seven.
Me: Sure. Sounds right to me.

5. We are blessed with these awesome parks here, that have awesome workout stations throughout. The machines are a mix of exercises. Some have weights attached, and some work with your own body weight. The best part, is thanks to our awesome weather, we can even use them in the Winter. I actually love working with them. I am not great at it, but I do try hard. Gigi, is a mild drill sergeant, but mostly she is just my biggest cheerleader. However, she does put me to shame. Serious shame. She is so strong and determined. She owns these machines. She is only four, so we have to be cautious, but man does she give it her all. In this particular picture, I was dying, probably more literally than I care to admit, and she was having a little posing fun off to the side. Chad was taking photographic evidence of my last minutes alive, and Gigi, who had just worked her butt off at like five machines, still had energy to get in some poses. Did I mention she puts me to shame?!!?

So, there you have it! Now, be sure you take a peek at all the other Funny Friday posts, and see how they captioned Gigi and I!! I will meet you there, right after I get more coffee. We are working hard at getting Gigi on a better schedule. Our schedule is iffy at best, and with us all being sick recently, it really got off track. Last night was night two (I am actually typing this is 9:03 pm of "last night"), and it went smoother than night  one. Night one when great, with one huge glitch. Gigi was asleep by 8:20 on the couch, but when Chad went to move her into bed, she woke up. Rather than going back to sleep, she stayed up. She did not go to sleep until after eleven, which means I was up until nearly 1 am. Nonetheless, I was up before 8, and had her up and moving before 8:30. So, we are on track. She has been asleep since just before 8:30, and the transfer to bed was smooth. So, fingers crossed. So, yes, I am probably sleep deprived and groggy, because changes in schedules are harder on me than her. SO, first coffee, than meeting you at the rest of the Funny Friday posts!!

I hope you all have an amazing last weekend of 2017. I hope this year ends well for you all, and 2018 starts amazingly well. Hopefully, we will all have a fantastic 2018!! Just a heads up... I am joining in on the Blog With Friends post for January. Stay tuned for it, coming your way! I talk to you about resolutions!